Email ThisBlogThis!Share to TwitterShare to FacebookShare to Pinterest
Labels: Tips

SBA 2006 / MSDE is really quite the memory hog. The only other application that has it beat is Firefox (oy).
Right now it is using 115,224k. Now I have to figure out how to cap its memory usage.... 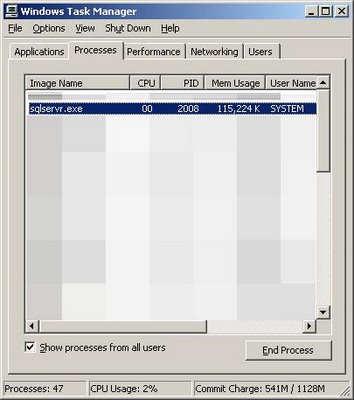 Email ThisBlogThis!Share to TwitterShare to FacebookShare to Pinterest
Labels: SBA2006

The welcome screen is useful and informative however MS is falling into the same pit of QB, by bombarding us with advertisements and all kind of useless information. Although not nearly as bad as QB is today, but more like QB five years ago..............

here are some more screen shots. 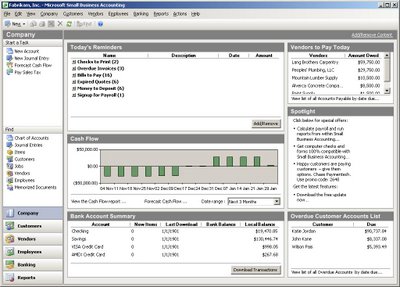 The Welcome Screen
Note I have customized my own company and got rid of the 'spotlight' pane but upgrading to SP3 brought that back ... grrrr... I got rid of it again. 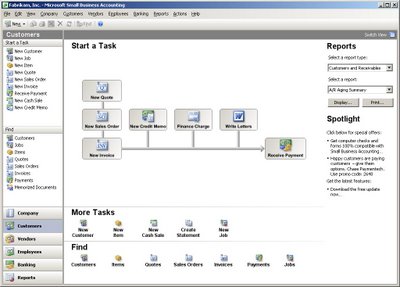 Microsoft Small Business Accounting 2006 is part of the MS action pack that recently purchased. I needed an accounting solution for my own company anyway, so i gave it a whirl. First impressions are good so far. Remember that I am a computer guy not an accountant.
Setup via the wizard was easy enough. The wizard actually is a tool that you can bring up as often as you like in order to further tweak and configure SBA. In the past i have used QB 2003, and find that SBA is almost exactly the same. MS definitely went after the QB crowd, even releasing a QB import tool. (UPDATE: the tool need not be installed as all new versions have it built in) The company file (as it is called by QB users) is actually a text file with 'directions' to the MSDE instance that gets installed. Looks like that was done just for the QB crowd that has a hard time with changing from "file->open". Kind of deceptive if you think that you can just backup that file. (note the tiny file size)

Reporting was simple, though i have not to customized any reports. One slick feature is the Cash basis vs. Accrual basis toggle. It actually works and does not have the known QB issue with switching from cash to accrual.

One thing that I did not like in FireFox 2.0 was the close (x) on each tab instead on on the side like in Firefox 1.5. Thankfully this site from Gina Trapani has instructions on how to revert the behavior to the 1.5 style.

Email ThisBlogThis!Share to TwitterShare to FacebookShare to Pinterest
Labels: Tips

I have no plans to install the new IE on regular machine. Ill give a whirl on my test laptop. I would wait at least a month or so, as it is a major rewrite of IE and is subject to all kinds of nasty surprises. IE 7.0 while be released as a critical update, so unless you would like to fall to the whims of Automatic update, follow this link to IntelliAdmin for instructions (and a utility) to block IE 7.0
Posted by A Critical System at 10/25/2006 11:07:00 PM No comments:

Email ThisBlogThis!Share to TwitterShare to FacebookShare to Pinterest
Labels: News 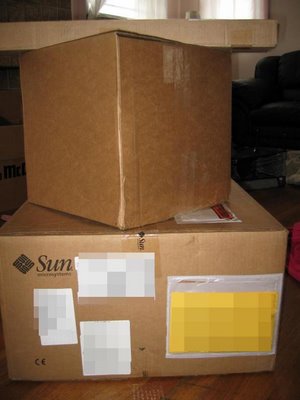 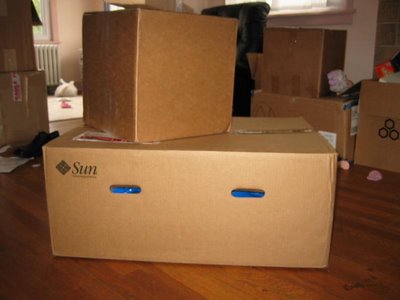 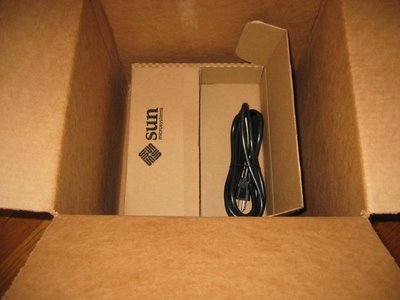 Yup all that box for just two power cables. 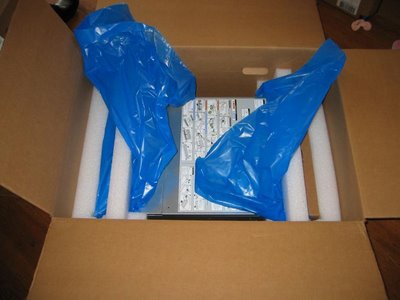 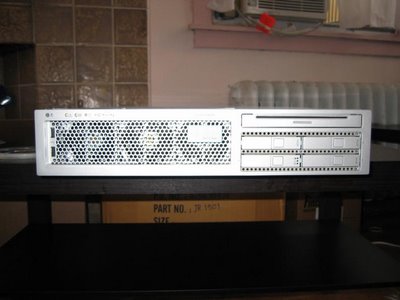 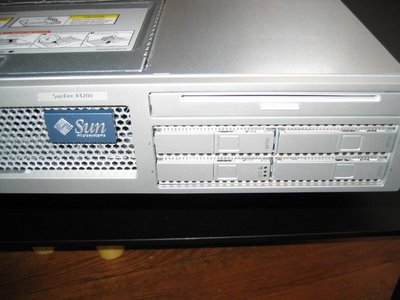 As most of you have heard (read), Firefox 2.0 is out. I have been using RC2.0 on a test laptop, for a while now so the new features are not a big surprise. I also have updated some of my extensions....now called add-ons. Some are broken, most work. The one that really need updated is the dnsstuff toolbar, hopefully Dan Martens of Western I.T. Group will provide an update for Firefox 2.0! 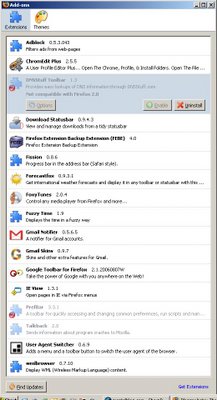